Hurricane Ida Helps Investors Say “I Do” to Oil Stocks

With Hurricane Ida sweeping through the Gulf of Mexico and Louisiana, 95.65% of the Gulf Coast’s crude-oil production, or 1.741 million barrels a day, was shut down, as well as 93.75% of the region’s natural-gas production according to the Bureau of Safety and Environmental Enforcement. One would think this would cause a jump in oil prices and natural gas prices as supply will be limited for the next few days, but instead the price of West Texas Intermediate crude oil was relatively flat with the price moving up $0.58 which equates to a less than 1% movement on Monday. Most of the movement in oil happened on Friday when it jumped 2% on the anticipation of the storm.

Oil producers and refiners saw a different Monday. Most of them were down more than 1% during trading on Monday with harder hit Phillips 66 down 1.4% after a temporary levee near one of their refineries was broken by floodwaters. The SPDR Select Energy ETF, XLE, was down 1.18% for the day. What does all of this mean to investors? It shows the expectation that the overall supply of oil will not be hampered even though some companies may suffer damage.

With refineries shut down, gasoline prices are expected to rise even if the price of oil does not rise dramatically. This happened after Hurricane Katrina as shown below. Oil prices were increasing leading up to Katrina but then fell dramatically. Gasoline prices followed oil, but with a lag. Gas prices peaked a week after oil prices peaked. So, drivers should brace for higher prices at the pump. 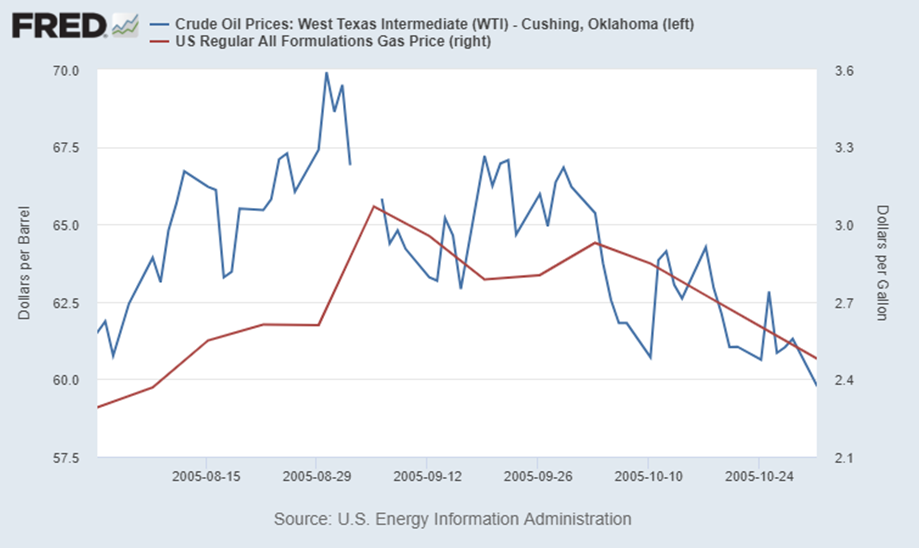 This could be a great time to look at your overall allocation to energy stocks and potentially scoop up some well-run companies at a discount. XLE is up 34% year-to-date through Monday, but was up as much as 56% at the end of June. Hurricane Ida should help reverse the pullback in oil prices caused by an increase in oil production from OPEC and a fear the COVID-19 uptick will reduce the economic comeback and demand for oil. XLE, along with most of the major oil producers, sport yields in excess of 4%, which is hard to find in today’s world of ultra-low interest rates.

If you have any questions about the current market environment and how it affects your portfolio, please feel free to contact me at ted.schumann@dbsia.net or 800-327-2377.

Have an Article Idea You Would Like to See?

We are always looking for ideas, questions, or comments regarding our newsletter articles! If you have an idea for an article or a question you would like answered, please email Kaylee McDonald at kaylee.mcdonald@dbsia.net.

For all the latest content, hot off the press!